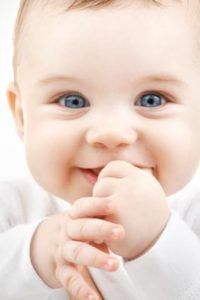 For most people those first baby cries of a child after birth are a sign of relief. You know that the baby is breathing and you know that the baby is there. Almost everyone I know has described the excitement and stress of waiting that little bit to hear the baby cry. However, scientists have conducted a study that suggests that babies cry differently depending on the language of their parents. It is fairly common knowledge that sound does affect many children even before they were born, but what wasn’t known was how early sounds begin to have an affect on sound production in infants. Apparently, infants pick up the patterns of their parents language and this recognition of these patterns are audible when babies cry. The study was conducted on 60 children between 3 and 5 days of age. All the babies appeared healthy, and all were carried full term. The crying would occur naturally as opposed to being a result of one of the researchers. Half of the babies belong to French speaking families, while the other half belonged to German speaking families. To me the idea that babies are actually able to recognize these specific patterns, memorize them, and then express them at such a young age is truly remarkable. I want to see if these findings carry over to other nationalities, and I am slightly curious to find out if the results differ in children with any sort of diseases or disabilities. If the results do differ than maybe we can use the findings to better treat the children.

5 Herbs that Can Help you Quit Smoking