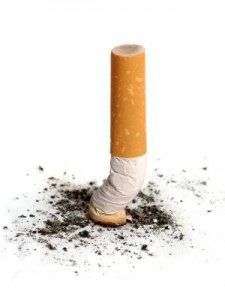 There have been recent reports about a two year old baby named Ardi Rizal in Indonesia who is addicted to nicotine and smokes over 40 cigarettes a day. Ardi was given his first cigarette by his parents in order to provide him with pain relief but he has become addicted and now throws tantrums if he doesn’t get his fix.  His parents, unwilling to make him stop smoking, feel that his habit is uncontrollable.  His father Mohammed said “He looks pretty health to me,   I don’t see the problem.”  His mother is unable to deny him of cigarettes because of his tantrum throwing and withdrawal complaints.

The baby is already dealing with the effects of cigarettes as he can barely move by himself.  He can no longer keep up with the other toddlers. Being so young his body cannot handle the toxicity of the cigarettes and condition is on a path to quick deterioration. Child advocates are publicizing the damage that second-hand smoke can do to a child, and they are speaking out about the pressure put on children to smoke in countries where 1/3 of the population uses tobacco and cigarettes as a mean of narcotics where they can be bought for a few cents. Even parents in North America are underestimating the damage that second-hand smoke can do to their children.  Even parents that smoke outside are putting their children at risk. Cigarettes don’t need to be smoked near children to damage a child’s health.  Kids can still absorb some of the nicotine through the fumes that contaminate dust particles settle in carpets, toys, and furniture.  The worst part is that these fumes can contaminate household objects for many months before they dissipate. The American Lung Association has found that secondhand smoke exposure causes disease and premature death in children and adults who don’t smoke, secondhand smoke contains hundreds of chemicals known to be toxic or carcinogenic (formaldehyde, benzene, arsenic, ammonia ect), and secondhand smoke causes 3,400 deaths from lung cancer and up to 69,600 deaths from heart disease every year.   It is important to think about young Ardi Rizal’s condition and consider quitting smoking in order to protect your family’s health and well-being.

5 Reasons Why You Should Take Multivitamins

Getting Your Kids Active – Lead by Example